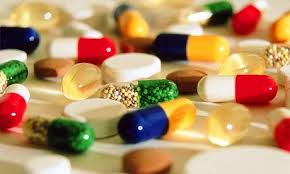 Drugs are classified in various ways. One of the key divisions is by level of control, which distinguishes prescription drugs (those that a pharmacist dispenses only on the order of a physician, physician assistant, or qualified nurse) from over-the-counter drugs (those that consumers can order for themselves). Another key distinction is between traditional small-molecule drugs, usually derived from chemical synthesis, and biopharmaceuticals, which include recombinant proteins,vaccines, blood products used therapeutically (such as IVIG), gene therapy, monoclonal antibodies and cell therapy (for instance, stem-cell therapies). Other ways to classify medicines are by mode of action, route of administration, biological system affected, or therapeutic effects. An elaborate and widely used classification system is the Anatomical Therapeutic Chemical Classification System (ATC system). The World Health Organization keeps a list of essential medicines.

Drug discovery and drug development are complex and expensive endeavors undertaken by pharmaceutical companies, academic scientists, and governments. Governments generally regulate what drugs can be marketed, how drugs are marketed, and in some jurisdictions, drug pricing. Controversies have arisen over drug pricing and disposal of used drugs